This is my childhood story which I have never forgotten. It is something that I call “The Last War.” I was 8 nearly to 9 when my brother and I frequently did not get along with each other very well. My sister was about 10 or 11 years old. My brother and I are 2 years adrift of age. I was only 4th grader while my brother was in his 6th. We were so childish that we often did not think twice before doing everything and it seems that we did not understand the meaning of brotherhood yet until there were frequent fights that made both our parents a little frustrated. Eventually our parents had their idea to unite us, fix our relationship, make us familiar with each other. They even asked us to sleep on the same bed every night.

Before the incident of “The Last War” my brother and I often quarreled, but it was only common fights which we could resolve them in separated ways such as: my brother would have forgiven me if I had lent him my personal PSP according to the time he specified, and on the contrary, I forgave him if he lent me his personal PS2 according to my deal.

One day I was watching television in the living room. All of sudden my sister came and switched the channel I was watching to the AV2 channel (the channel that is used if the user wants to connect other devices with the TV via cable) with which my brother would play his PS2 on the television. At that time my sister changed the channel I was watching intentionally. She took the TV remote I was holding. That was where I started to cry and said bad words and immediately ran to my mother who was in her room. That was not the incident I called “The Last War” earlier, it was what made me even more upset, angry and sad.

One afternoon everyone was at home: I was playing ‘The Cold Iron’ alone in the living room; my sister was in her bedroom; my mother was doing the laundry and cleaning some kitchen appliances up in the backyard; and my father was sitting while smoking and drinking coffee in the front yard. At that time my brother who was in his room suddenly approached me and seized the iron weapon toy I was playing. You can tell that was the beginning of “The Last War”. We fought bitterly. Hearing such commotion, our father came to us. He looked so frustrated and angry at the same time that he dragged me and my brother to my room and locked us there. Then he opened the door and told us to continue fighting, hitting and beating each other in front of him. My sister cried hysterically and shouted: “Stop it!” repeatedly. We stopped beating each other after we felt tired and we fell asleep.

Since that day my brother and I hardly ever fought anymore. I began to understand the reason why my father scolded us. I also realized that brotherhood meant so much for both of us. Many positive changes we experienced after the afternoon incident. We started to learn how to make mutual understanding, sharing, forgiving, and many more. And finally, we had a relationship that was much better than before. (M) 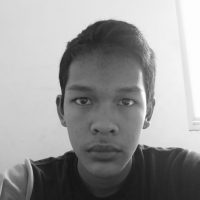 My name is Mochamad Rivaldi Yusuf. Most call me Rivaldi. Yup, that’s my nick-name. I was born on March 21, 2003 in Bandung.  I love to design, listen to music, dan cycle. I am studying at SMK Telkom Bandung, majoring in Multimedia.

Here’s my motto: “Keep doing positive activities and be creative.”

1 thought on “The Last War”