Two years after India’s independence, an artist was born, whose struggle proved that true love cannot be separated by distance or social status. Cycling from India to Sweden seemed impossible, but that was what an artist named Pradyumna Kumar Mahanandia or who is familiarly called P.K did. The only reason was for love.

Despite the attempts made by Mahatma Gandhi–the founding father of India who were known for his anti-violence resistance to the British–to oppose the caste system, the old tradition was reintroduced after the British departure from India. This makes oppression of the lower classes is a normal thing in India.

Born as a poor person from the lowest caste in a remote village in India, P.K’s childhood was filled with misery. Nobody wanted to be friends with him. In fact, if someone accidentally touched him, he or she would immediately wash his or her hands. Because of that, he was touted as “the untouchable man.” P.K’s hatred of the caste system made him think that the British colonial period was better than the independence of India.

The only thing which P.K did to distract from his sorrows was drawing. He expressed his feelings through a piece of paper or canvas. Someday his persistence in drawing would lead him to his true love. A fortune teller once said that he would marry a woman who came from a faraway land, she was a Taurus, owned a forest and was a musician. This prophecy was his reason to survive even though it had swallowed all the bitterness of life. Whenever he felt sad, his mother would remind him about that prophecy to make him smile again.

Due to his excellence in drawing, P.K received a scholarship at an art college in Delhi while working as a street painter to fulfill his daily needs. In the afternoon of December 17, 1975, he found his true love while waiting for his customers at Connaught Place–a shopping and business center in Delhi–his life would change completely from that day. A tourist from Sweden approached and asked him to make a sketch of her face. The woman was Charlotte Von Schedvin.

According to P.K on his interview with CGTN (China Global Television Network), Charlotte’s big blue eyes scanned him like an x-ray. That made him very nervous and speechless. Nevertheless, he started working even though his hands were shaking. As a result, his sketch of Charlotte’s face was not very good. He realized it and asked Charlotte to come back the next day so he could make a better sketch of hers. Another thing he knew, he had fallen in love with the foreigner at first sight.

But the next day, the result was the same. P.K was so nervous that he could not draw well. Although feeling disappointed by the results of the sketch, Charlotte came again the next day. That was the moment when he remembered the prophecy about his soul mate. Then, he began to ask the woman:

“May I ask you some personal questions?”

Instantly Charlotte was shocked and her eyes widened. Then she said:

The excited P.K ignored Charlotte’s question, so he asked her again:

“Are you a musician or a music teacher?”

“Yes, I’m learning about music so I can become a music teacher”

At that time Charlotte became convinced that the curly-haired person in front of her was the man she would love and share her life with. He then asked again:

“Are you an owner of jungles?”

“Jungles, no, but forests, land, and lakes”

Knowing the latter answer, he was pounding even more, he couldn’t control his trembling mouth. With an English pronunciation that couldn’t properly be spoken from his mouth, he said to Charlotte “we are destined to meet, you will be my wife”.

The scene suddenly turned awkward. P.K who was aware of his actions immediately lowered his head, trying to look normal while sharpening his pencil. In his heart, he felt guilty, fear, and of course nervous because he had “proposed” a stranger that he had just met. With Charlotte’s expression at that time which turned serious, he would not be surprised if she would report him to the police as she felt annoyed.

But his concern did not happen, Charlotte did not report him to the police. Instead, she smiled at him. From then on, she believed that the artist would paint her future with millions of colors.

Charlotte accepted P.K’s “proposal” and agreed to go to P.K’s hometown, Odissa. He took her to  Konark’s Sun Temple and showed her the Dharmacakra. This made her felt touched and shed tears. She had seen the Dharmachakra images before, but this was the first time she saw it in person.

That was the moment when Charlotte gave the artist a kiss. For the first time, a man who was often stoned by the upper caste class received a kiss other than his own mother. Moreover, the kiss did not come from an ordinary woman, but from a beautiful woman who still had royal blood within her.

“I used to feel I’m below the dogs and the cows, suddenly, I felt now I’m taller than the sky”, that was what he felt at the moment according to his interview.

Once they arrived at Odissa, Charlotte felt familiar with the area as if she was returning home. She said in her interview “if you believe in reincarnation, I feel very sure that I have lived in India before”. It didn’t take long for her to fall in love with him. They then held a wedding adopting the traditions of the local community. But sadly, she had to return to Sweden despite being bound by a marriage relationship.

Charlotte had offered his husband to come with her, but he refused because he still had to complete his studies first. In addition, she also offered him some money so he could buy plane tickets to Sweden, but again he refused and was determined to go to Sweden on his own.

For more than a year, the two newlyweds were only connected by mail. Until one day, P.K did the reckless thing to meet his wife because he could not stop his longing for her. He didn’t have enough money to buy plane tickets, so he decided to sell everything he had to buy a bicycle. Inspired by the 16th century Chinese pilgrims who traveled to India by foot, he began his journey from India to Sweden on a bicycle. If a Chinese can travel to India by foot, then it would be possible for an Indian to travel to Sweden by bike, wouldn’t it?

On January 22, 1977, P.K ignored his wife’s warnings – who worried that he might ride a bicycle across the continent alone – and started pedaling his way to Sweden. He did not care about all the terrain he would possibly go through, the only thing he wanted was to meet his wife again. It was easier if he lived in today era when he can simply meet her virtually by Zoom or Google Meet to evaporates his feeling of intense longing for her. But at the time, he obviously couldn’t do that.

P.K actually didn’t understand Geography, all he did was to go towards the sun direction, to the west. He cycled 7 thousand kilometers through Afghanistan, Iran, Turkey, the Balkan Peninsula, Austria, Germany, Denmark, and finally Sweden. To fulfill his life necessities during his journey, he became a “traveling artist”. His life was at uncertain. There were times when he got a ride and was given a place to rest, and there were times where he was arrested by the police on suspicion of being a drug dealer (considering he was from abroad). His struggle was very hard, especially because he didn’t like to cycle before. When he felt insecure and wanted to give up, he said to himself “I will die on the way or I will meet her in the next life.”

While arriving on the border of Sweden, P.K met the immigration officers. Some officers did not believe that a Swedish noble was willing to live a life with a short black Asian like him (von Schedvin is the family name of some Swedish nobility). He then said to P.K in an insulting tone, “Your prospective father in-laws are good at shooting. If you love your life, you better get out from this country. Or he will shoot you as soon as he sees you. “

Of course, those words wouldn’t stop someone who had been walking through the desert and mountains for 4 months. P.K himself was surprised when he learned that his wife was a noble descent because she never mentioned that.

Finally, on May 28, 1977, P.K arrived in Borås, where Charlotte lived. Dirty, exhausted and even difficult to stand up, he met Charlotte’s father. Even though at that time there was a rule that the nobles were forbidden to be with color people, Charlotte’s parents gave their blessings after seeing their daughter’s intense love for him. A noble descendant married to a poor person from India was certainly a strange thing in Sweden. Charlotte was often asked by people “are you still with him?”, hinting that they didn’t believe Charlotte was still with P.K. But Charlotte’s love for him is so strong, nothing can stop her from loving the man of her choice. The couple remarried in 1979, but this time it was adopted Swedish traditions.

Pradyumna Kumar Mahanandia currently lives in Sweden, working as an Artist and ‘Art and Culture Advisor’ under the Swedish Government. P.K and Lotta–Charlotte’s nickname after they got married–live happily and have two children in Sweden.

Although he had married a woman who came from a high caste and lives in Sweden, he has no grudge against the high caste people who bullied him. He said that “Love gives me strength to forgive”.

From this story, we can learn that patience is the key to happiness, P.K always endured his sadness as a low caste person and patiently waited for his soul mate as mentioned by the prophecy. Furthermore, we must always believe in God’s plan, that ‘tomorrow will be better than yesterday’. Perhaps today we used to feel down in the dumps, just like what P.K did, but who knows that tomorrow we can be high as the sky.

The thing is, don’t “enjoy” your suffering by continuing to cry over it. Try to do something you love that will make you more productive, for instance, drawing or painting, like what P.K did to distract him from the cruelty and injustice of the world, or writing just like what I am doing, or anything, as long as it can make you feel better and can be beneficial someday. (J)

Per J Anderson.” Amazing Story of the Man Who Cycled from India to Europe for Love”. 2017. Oneworld Publication: London

2019. ”About an Indian who cycled to Sweden for love”. Youtube 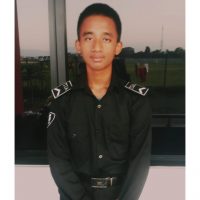 Hello. I am Jaisy Muhammad Fatih. I am the student of SMK Telkom Bandung majoring in Access Network Engineering Program. In my leisure I like writing and having discussion of any issue or topic, especially history.

My life motto is: “Dream a great dream and then work hard to achieve it.”