One of the things that makes me happy is my free time when I don’t have any responsibility concerning to my school tasks as the example. I can relate to my enjoyable things such as listening to the music I like. My favourite music genre is rap and R&B. I like hip-hop because this music genre commonly presents lots of emotional lyrics. They are coming from the rapper himself. Most of the lyrics tell about his difficult past time, the physicological thoughts in his mind, the struggle and the meaning of life that mixed with the beats and rhymes to make such a very deep meaningful music. One of the songs that has kind of thing is “I’m Not Racist” by Joyner Lucas. The song talks about what inside the mind both of black and white people in the United States. It is also about how they interact to each other and exchange ideas on racial conflicts that still often happens in that superpower country.

Rap songs also help me to improve my English because they are normally spoken in English. They have a lot of slang words, most of them are comprising ethnical slurs which aren’t appropriate saying. By listening to the songs I am not just learning formal English like at school.

I also like R&B because of the same reason why I like rap. It is meaningful but most of the lyrics usually talk about love and romantic relationship. The beat itself is usually slow and chill and the singing rendition of the singer mixes with the song harmoniously to make the song beautiful. One of my favourite R&B songs is “On Bended Knee” by Boyz II Men.

Another enjoyable thing for me is playing video games. The ones that I like to play are Dota 2, GTA SA, and Minecraft. I usually play Minecraft with my friend in my or their house. I play with them usually for 3 or 4 hours a day. We have our survival world together, build our house, fight mobs, or do something what usually normal people do in Minecraft. I play Dota 2  two or four times a week. I usually play it on Saturday after having school activities. I play for about 4-6 hours at a time. I can play about 4-7 ranked matches or 5-11 turbo matches. I also play it on Sunday after returning from church.

I sometimes go with my friend to the internet café by his motorcycle. We use Discord and have fun pranking each other by playing indecent songs whose lyrics are funny. We can laugh together listening to the songs. I don’t play GTA SA much. I only play it when I get so bored and have nothing else to do. I play it on my phone wherever and whenever I want. I have already finished all the missions in that game.

Music and gaming have become the parts of my life. I also want to experience some new stuffs like roaming around the world, driving a car and visiting new places, meeting new people and making friends with them, taking my girlfriend out for a date and doing many other fun things. (M)

Image was taken from https://www.musicgateway.com/blog/music-news/music-and-games-event-music-meets-gaming 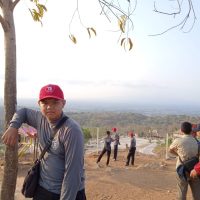 My name is  Mathius. I was born on September 12 in Bandung. I like watching anime and reading books.