According to Wikipedia a video game is an electronic game that involves interaction with a user interface or input device, such as a joystick, controller, keyboard, or motion sensing devices, to generate visual feedback for a player. Most of the gamers nowadays they usually use their smartphones to play games. There are two kinds of games: offline and online games. The difference is in the internet connection. Offline games can be played with no internet connection. Moreover, online games are harder but interesting to play. Because of the level of difficulties, the gamers are challenged to think good strategies so that they can add the difficulty to the next level.

In the past people had their experience of playing games on television like Nintendo. The game was very popular in the midst of 80’s to the beginning of 90’s. If they did not have the device or the player, they went to their friend’s house to play it. As they often came to their house, they became familiar with their friend’s family members. Nowadays people are playing games through their own computers, mobile phones or gadgets. When they get into their playing video games, they often forget what they need to do in their routines. The worst is that they are on their own virtual world without caring about other people. They tend to be selfish. In this case, the games are controlling their body and mind.

Video games can be very entertaining for some reasons. When you feel bored, so lonely, or even feel down, you can play it anywhere and anytime. Talking about games, they cannot be separated to gamers. A gamer is a person who plays games. Here in Indonesia we have a lot of great gamers. One of them is Reza Oktavian. Do you know him? People know him as Reza Arap, an influencer and also a musician in Indonesia. Who doesn’t know Weird Genius who brought ‘Lathi’ a global hit? He is the member of the EDM and synth pop music group. As a YouTube content creator, he often made online games tutorial. He will turn on the camera in order to show his playing the games. Then he will upload them on YouTube. Million viewers have watched his videos and he can get paid from it.

The worst part is when gamers, especially youngsters become addicted to playing games and they enjoy using their phones too much. Surely, it’ll have bad impacts on them. They will forget that they have to eat, to do their homework or job, to gather with the family and even to worship. Once I read the news about a gamer who died because he was playing games for hours and the result he was lacking enough rest and having meal.

Video gaming can entertain people who play it, yet it can make addiction. They must be able to manage their time and particularly can get benefits, too. (A) 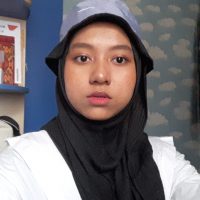 My name is Almadhia Putri Humaira. I am a shy and quiet person. So, I try to train myself to be more confident these days. I don’t really like crowd. I like drawing, doing something new in a good way, learning any language, and I am into singing recently. My life motto is: be a better version of ourselves and live a good life everyday.