Coronavirus or COVID-19 has now spread in almost all countries in the world. It is caused by the quick spread of the virus from one person to another. The spread was also caused by the lack of people’s awareness and knowledge. Many consider this virus similar to an ordinary flu virus. A lot of countries in the world have taken immediate action when they learned that their citizens have contracted with Coronavirus. Among them directly impose several policies, among others: lockdown, social distancing, work from home, etc.

Furthermore, the governments of those countries must also give the order to their citizens to remain at home and not to gather with other people in large numbers. As done by Italy, they postponed or canceled some major events in order to prevent the gathering of people, such as stopping a sizable soccer competition in the European continent. So, citizens also play a very important role to prevent the spreading of this virus. Without their awareness, I am sure this virus will not be vanishing in the near future.

To be honest I was very concerned and sad when I heard the news about medical personnel who did not wear personal protective equipment while doing their job due to the scarcity of sort equipment. Of course, the government must take serious action to provide the needs of medical personnel so that their safety is also maintained.

Even after several policies have been enacted, sadly, there are still many people who disobey the regulations because they cannot be free to do what they want. Of course, I strongly reject such acts, because the spreading of this virus has not been completely reducing, even more towards increasing. In Indonesia, it is also rumored that there are many areas that are easing social restrictions. The government should have detained a little longer due to social restrictions until the spreading of the virus completely decreases.

From those facts mentioned above, it can be said that to stop the escalation of COVID-19 sufferers, the preventive actions are needed by all members of the community, such as government, medical personnel, and citizens. What is very important now is the citizens’ awareness to comply with government policies and their obedience on the health protocols before the vaccine found so that the medical officers more easily carry out their duties, and in the end, the virus’ spreading will stop. (R) 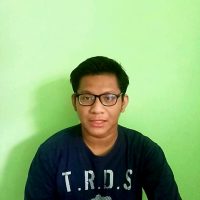 Let me introduce myself. I am Rafi Ahmad Haidar. I enjoy photography. Writing as well as reading are like mind and heart theraphy for me. Now I am studying at SMK Telkom Bandung, majoring in Multimedia.

I have my own life motto which is “If you desire of doing something, just do it. If you don’t want it, you don’t have to. Everything needs to be done wholeheartedly.”